Synchronous execution blocks the thread until the task gets executed, means thread need to wait before moving on to the next task. For example, in a car reservation app, if user interface gets frozen for every search, then it results in poor user experience. To overcome this problem, we can asynchronously execute tasks. The task is handed over to another thread so the main thread can work on other tasks; for example, we can show a progress bar or allow users to see partial results.

In this article, we design and implement an Asynchronous method invocation design pattern. This pattern allows us to submit a task. This task gets executed in a new thread, and when the execution completes, then the result or exception if any are passed to a callback.

This whole project is available in Github

Working on lower level thread programming is complex because it involves handling thread life-cycle and inter-thread communication with proper synchronization and also testing multi-thread code is cumbersome. To overcome these problems, we can use the Async method invocation design pattern. In this design pattern, we delegate our tasks to an Executor, and it is responsible for executing our task on a separate thread.

To implement this pattern, we are going to define two interfaces and two classes.

Below picture shows how this pattern works. 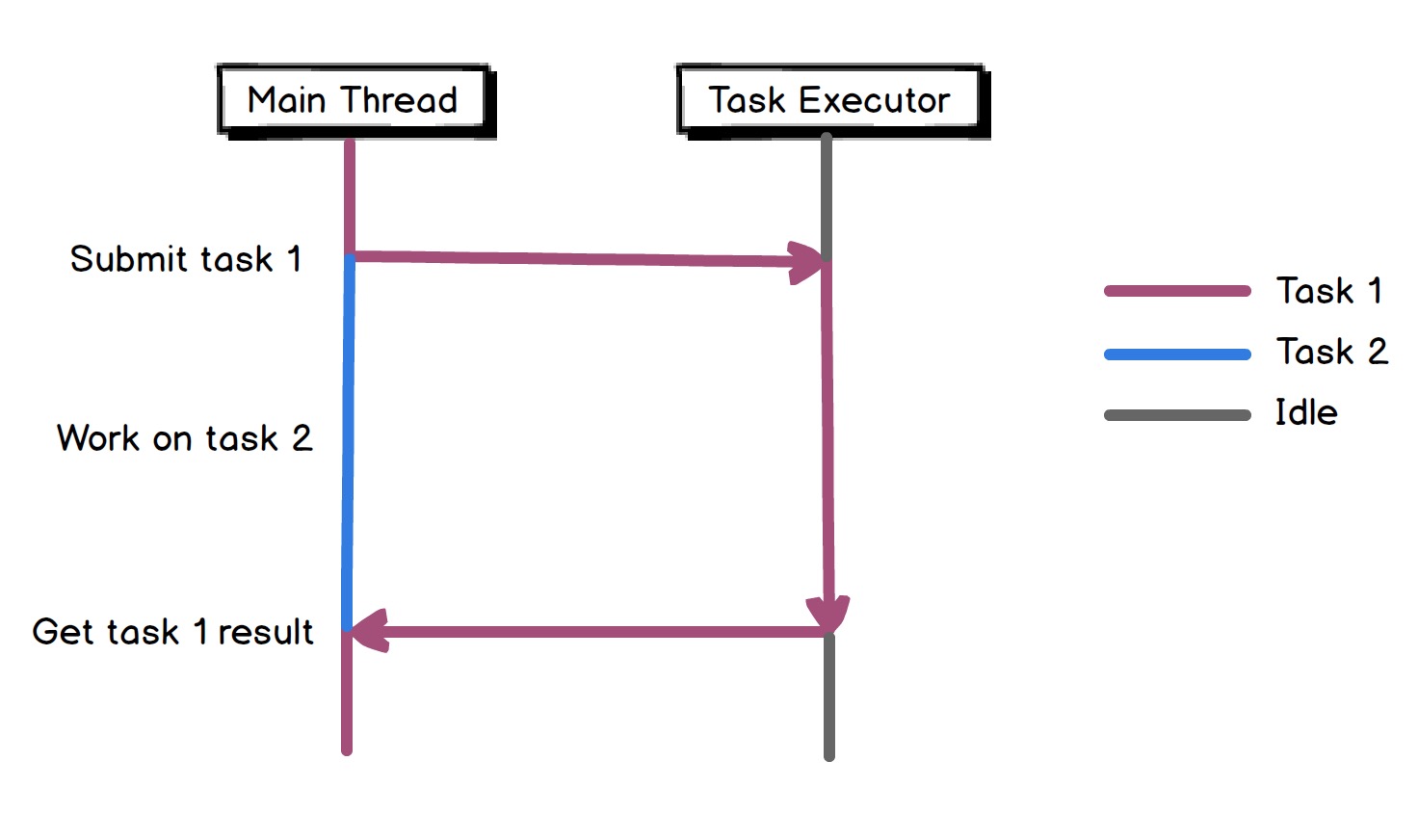 Below are the interface declarations.

Let’s implement CompletableResult. Users will never directly use this class, so we declared it as an inner class of ThreadSyncExecutor.

<1> Instantiate all required variables to track the execution progress.

<2> New object instance is created to use it for synchronization and callback is stored for later use.

<3> Once after the Callable execution completes, then its result is stored by calling setValue() and setValue updates the state to COMPLETED. Callback gets invoked with the result and because there is no exception, so exception will be empty. Lock on the object needs to be released because there might have been a thread waiting on the lock, then it gets released. await() method is the blocking method so some threads might have been waiting for the result so setvalue() method releases it.

<4> In case of an exception, ThreadAsyncExecutor calls setException by passing the exception. setException() we update the value to FAILED and invokes callback with value as null and exception instance and then releases the lock on the object instance.

<5> await() method contains synchronized block on the lock instance. It uses isDone() to check the status of the execution. If the execution is still in the RUNNING state, then it calls wait() on the lock object. Once the ThreadAsyncExecutor calls setValue or setException, then the lock gets released.

<6> It returns the status of the execution. If the status is higher than RUNNING, then either execution of the Callable is complete, or it might have thrown an exception so in either case it is completed, so it returns true or else, it returns false.

Lets submit some tasks to Async method and see how it behaves, below code will use ThreadAsyncExecutor.

Output of the code:

<1> Created AsyncExecutor instance and then we are printing a message to show that main thread started execution.

<2> Passed a Callable of type boolean which returns true after 3 seconds. Look at the implementation of task method, which returns the passed value after given seconds. Second argument is BiConsumer callback, after Callable execution, AsyncExecutor executes this callback. In this case, this callback gets value ‘true,’ and it gets executed after 3 seconds and finally printing the result to console.

<3> Main thread gets blocked when it executes await() on task1 because it has a synchronized block which blocks the thread until the passed Callable gets executed.

<4> Callable of type String which takes 5 seconds to execute.

<5> Callable of type integer but this throws an exception after 2 seconds. task3 result is printed before task2 because task3 only takes 2 seconds while task2 takes 5 seconds. task2 prints the value and task3 prints the exception.

We implemented the Async method invocation design pattern and tested by passing some Callable and callback instances. This pattern allows us to submit tasks, and the main thread can continue with other tasks without waiting for the result. Once the result is ready, then the result is passed back with a callback.