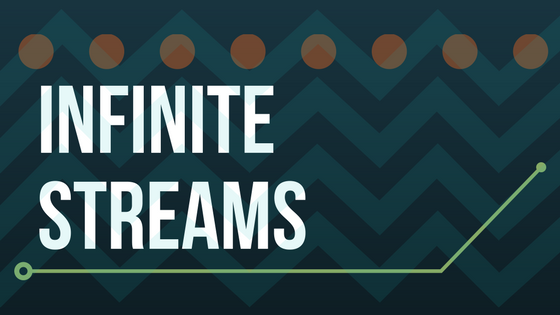 Streams allows us to generate endless progression of discrete objects. There are couple of methods available in Java which will help us to generate infinite sequences.

There are four main stream interfaces in java.util.stream package; Stream, IntStream, LongStream and DoubleStream. All of these interfaces have a common method called iterate, which will generate infinite objects. I am using IntStream as an example in this article but these examples are also applicable for other stream interfaces.

Below code starts from 0 and continues to generate numbers by incrementing two.We can customize the lambda expression to generate different type of sequences. I added a limit on the sequence else the code continues to execute indefinitely.

We can also use ‘generate’ method which takes the supplier as parameter. This method can be used to generate constant or random numbers. Supplier is a functional interface which will not take any input so it will not depend on its previous state.

Random class provides some utility methods to generate infinite random numbers in the form of integers, longs or doubles. In below example I used ints method, which takes inclusive start and exclusive end range.

« Recipes for Optional Regex Tester With Spring Shell »
comments powered by Disqus
Never miss any article, subscribe to my newsletter