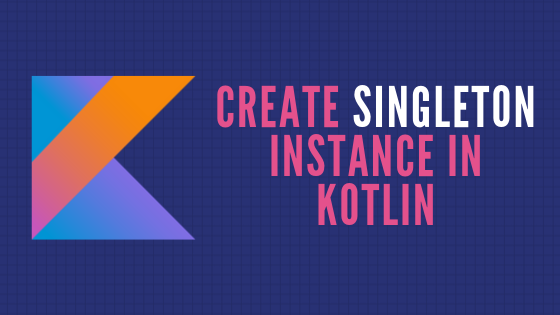 Compare Singleton between Java and Kotlin

Before implementing Singleton in Kotlin lets see sample code in Java, so it’s easier to learn;

In Java, we need to declare a class with a static synchronized method which checks whether the instance is null or not and if it is null then creates the instance. It is a little complex for beginners to understand. Let’s implement the same in Kotlin;

It’s simple in Kotlin, declare singleton using object keyword, this declaration is called object declaration. At the execution time, Kotlin maintains a single instance of DatabaseInstance. To use this object, call getConnection() with a declared name like below;

Sometimes we might need to execute code before the execution of getConnection(). We can do this with constructors in Java, the same way we can put our initiation code in init in Kotlin

Declare within other object declaration

To call getLogHome() just use Object names separated by dots, like SystemInstance.LogInstance.getLogHome()

Declare within a class

We can declare objects in a class.

Can not declare in local

Can not declare an object within the functions because Kotlin throws an error saying Named object ‘LogInstance’ is a singleton and cannot be local. Try to use anonymous object instead

Comparing to Java declaring Singleton’s are so comfortable in Kotlin using object. In this article, we learned using object to create Singletons.

« Cloud Configuration With Micronaut and Consul How to use records in Java »
comments powered by Disqus
Never miss any article, subscribe to my newsletter